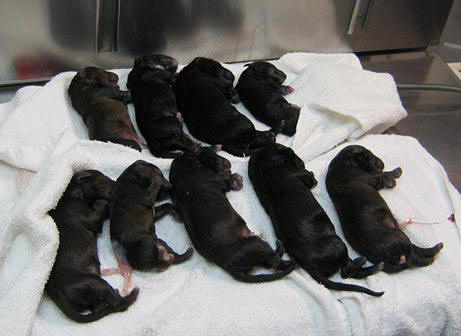 A cesarean (C-section) is a surgical procedure in which unborn puppies are surgically removed from the mother dog’s uterus. It is performed when an animal is having problems while delivering the newborns and is typically an emergency (not an elective) surgery. For certain breeds prone to dystocia (difficult birth), such as English bulldogs, a cesarean may be planned.

Sometimes, the dog can also be spayed following the surgical removal of the puppies. This prevents future pregnancies and eliminates the risk of future cesarean surgeries.

Diagnosis of C-Section for Dogs

Determining the need for a cesarean requires a few tests on the dog. Your veterinarian may perform digital vaginal palpation to evaluate maternal pelvic abnormalities, the size of the fetus and to attempt manual removal without surgery. If the puppies are too large or the pelvic canal too narrow for passage, a cesarean is recommended.

How is a C-Section Performed on Dogs?

Surgery is the final step after medical management has failed to assist the pregnant pet to deliver naturally. The mother must be carefully anesthetized in order to perform surgery safely while minimally affecting the unborn puppies.

The surgery is performed through an incision in the dog’s abdomen and the surviving puppies are allowed to nurse normally as soon as the mother is out of surgery.

After your pet returns from the hospital, she will need to be kept quiet indoors while she heals (approximately two weeks). It is important that you prevent excessive activity and “rough-housing.”

The incision should be monitored daily for signs of excessive redness, swelling, or discharge. Do not allow your dog to lick or chew at the incision, and if this is impossible, you should obtain an “Elizabethan” collar that is placed around the neck to prevent access to the incision.

Some vaginal discharge is expected for a few weeks after pregnancy and C-section.

The only way to prevent the need for C-section is by avoiding pregnancy in your pet. Early spaying of your animal will make it impossible for her to become pregnant.