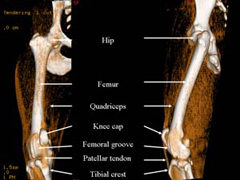 The patella, or knee cap, is a small bone buried in the tendon of the extensor muscles (the quadriceps muscles) of the thigh. The patella normally rides in a groove within the femur (thigh bone) in the knee (Figure 1). The patellar tendon attaches on the tibial crest, a bony prominence located on the tibia (shin bone), just below the knee. The quadriceps muscle, the patella and its tendon form the “extensor mechanism” and are normally well-aligned with each other. Patellar luxation (dislocation) is a condition where the knee cap rides outside the femoral groove when the knee is flexed (Figure 1). It can be further characterized as medial or lateral, depending on whether the knee cap rides on the inner or on the outer aspect of the knee respectively.

Patellar luxation is one of the most common orthopedic conditions in dogs, diagnosed in 7% of puppies. The condition affects primarily small dogs, especially breeds such as Boston and Yorkshire terriers, Chihuahuas, Pomeranians, and miniature poodles. The incidence in large breed dogs has been on the rise over the past ten years, and breeds such as Chinese Shar Pei, Flat-Coated Retrievers, Akitas, and Great Pyrenees are now considered predisposed to this disease. Patellar luxation affects both knees in half of all cases, potentially resulting in discomfort and loss of function.

Patellar luxation occasionally results from a traumatic injury to the knee, causing sudden severe lameness of the limb. However, the precise cause remains unclear in the majority of dogs but is likely multifactorial. The femoral groove into which the knee cap normally rides is commonly shallow (Figure 2a, Figure 2b) or absent in dogs with non–traumatic patellar luxation. Early diagnosis of bilateral disease in the absence of trauma and breed predisposition supports the concept that patellar luxation results from a congenital or developmental misalignment of the entire extensor mechanism. Developmental patellar luxation is therefore no longer considered an isolated disease of the knee, but rather a consequence of a complex skeletal abnormalities affecting the overall alignment of the limb, including:

Because there is evidence that this condition is at least in part genetic, dogs diagnosed with patellar luxation should not be bred.